The oldest and most basic oil lamps can be traced back to Biblical times. The simplest of these were wicks that had been dipped in grease or fat and then pushed into a bottle top and lit. 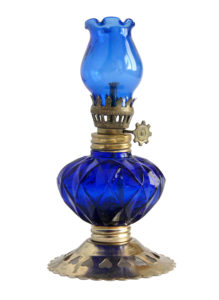 Vintage oil lamps made of a small dish with oil were a favorite with the new colonist of America. These lamps gave off a cloud of smoke and their light was weak, but as many were used to candles as their source of light, these simple lamps were a good alternative.

Oil lamps with two openings for wicks were called cressets. One of the most favored shapes of the early colonist was to have an opening for the wick on one side and a handle on the other. It was common for the handle to have a connecting hook that could be used to secure it to a mantel or shelf.

The colonist later innovated vintage oil lamps by creating what came to be known as a ‘betty lamp”. This new oil lamp solved some of the issues encountered with older versions. Older versions had the problem of allowing drippings to fall to the floor.

But this newly innovated lamp had a small channel that was set into a larger one and this prevented the drippings from falling to the floor. This lamp had a built in mantel hook and a device that allowed users to loosen the wick for times when it became stuck.

A Swiss chemist later further innovated the oil lamp by eliminating the need for a floating wick. This lamp used a simple glass chimney and cylinder shaped wick. When it was found Whale oil smoked less and had less of a smell, they quickly became the favorite of many.

For collectors, it is often difficult to identify the Whale oil lamps due to the fact that makers of the day seldom marked them. These lamps were made more for function than for fashion.

In the mid-1800’s glass lamps were fashioned and made to look like beautiful vases. It was common to find them made with colors of sapphire, opal, and amethyst. Later that century many of these beautifully designed lamps were fitted for kerosene and their original burners were removed.

Once the science of extracting kerosene from petroleum was mastered and a large deposit of oil was discovered in Pennsylvania, the age of light technology began. Not long after, it was discovered how to make kerosene burn more cleanly and this led to oil lamps converting to kerosene in what seemed like overnight.

Once kerosene became the standard, further innovations allowed for the lamps to emit brighter light. In the 20th century, it was found that by soaking the wick in metal oxides the lamps would burn even brighter, had no smell and did not make smoke clouds.

With each innovation the desire to use artificially made light increased. The convenience of having light when and where it was wanted was something everyone wanted. Now that electrical light is commonplace, collectors desire to own these old oil lamps.